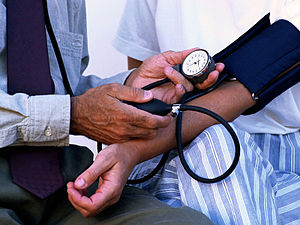 A sudden drop in blood pressure caused by moving from lying down to standing has been linked to a higher risk of heart failure, a condition where the organ does not pump with sufficient force. There are around 750,000 sufferers of heart failure in Britain and symptoms can include swollen ankles, breathlessness and fatigue. Reachers at the University of North Carolina found a link between people who feel light headed when they stand up, known orthostatic hypotension and heart failure, especially those aged between 45 and 55 years compared with older people. The results were published in the journal Hypertension. Blood pressure was taken from 12,363 healthy adults when lying down and shortly after standing up and patients were followed up for an average of 17 years.

In that time around 11% of people who developed heart failure, had orthostatic hypotension compared with 4% who did not have the problem.

It was calculated that people with orthostatic hypotension were 54% more likely to develop heart failure than those without. Once other factors that can cause heart failure, including high blood pressure, were accounted for, the increased risk was around one third.

Dr Christine DeLong Jones, lead author said: “Orthostatic hypotension   appears to be related to the development of heart failure along with other conditions known to cause heart failure.

“Hypertension, diabetes and coronary heart disease are already known to   contribute to a person’s risk of developing heart failure. Orthostatic blood pressure measurement may supplement what is already known about the risk for heart failure and requires no additional equipment, just a standard blood   pressure cuff.”