Of the more than 700,000 Americans who suffer a heart attack each year, about a quarter go on to develop heart failure. Scientists don’t fully understand how one condition leads to the other, but researchers in the Perelman School of Medicine at the University of Pennsylvania have now discovered a significant clue—which ultimately could lead new therapies for preventing the condition.

Heart failure can develop after a heart attack due to a long-term damage response by the immune system that transforms much of the heart muscle into stiff, fibrous, scar-like tissue. In a study published today in the Journal of Clinical Investigation, researchers report that a set of signaling proteins produced in the epicardium, a layer of special cells that lines the heart muscle, appears to play a key role in keeping this wayward damage-response process in check.

“These findings highlight the importance of the heart’s interaction with the immune system in the post-heart-attack response,” said co-senior author Rajan Jain, MD, an assistant professor of Cardiovascular Medicine. “They hint at the possibility of developing designer therapies aimed at modulating specific aspects of immune system in the future as part of treating patients who have had a heart attack. ”

Prior work from Epstein and colleagues at Penn has shown that in the epicardium, a cascade of protein-to-protein interactions known as the Hippo signaling pathway occurs early in life and is important for normal heart development. Other research has suggested that two key components of the Hippo pathway, the signaling proteins YAP and TAZ, also promote the regeneration of heart muscle after experimental heart-attack-like damage in newborn mice.

In this study, researchers examined the role of epicardial YAP and TAZ after heart attack in the adult heart, which, compared to the fetal or newborn heart, is much less able to regenerate itself following injury. After an experimentally induced heart attack, normal adult mice, as expected, showed a small amount of fibrous change in the heart, limited to the area where a coronary artery were blocked and heart muscle had been deprived of oxygen. By contrast, in adult mice whose YAP and TAZ genes had been deleted from their epicardial cells just before the heart attack, there were signs of widespread inflammation and fibrosis in the heart muscle.

“The hearts of these mice were essentially encased in fibrotic cells,” Jain said. “We found that this extreme fibrotic response was accompanied by a decline in heart function resembling what is seen in human heart failure, as well as rapid weight loss and a much higher death rate.”

Researchers found evidence that the Hippo-pathway proteins normally trigger the increased production of the immune protein interferon gamma. The latter summons regulatory T cells – “T-regs” – which generally calm immune responses, and have been shown in prior research to reduce heart-muscle inflammation after a heart attack. In the YAP-less, TAZ-less mice, a heart attack failed to induce the usual rise in interferon gamma production and recruitment of T-regs, allowing inflammation and fibrosis to run rampant. 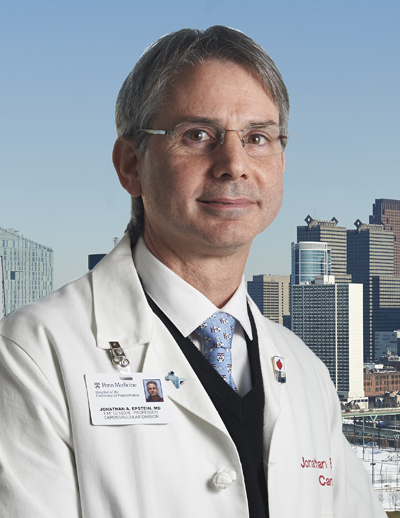 “We are hoping to harness the immune system, just as we are doing at Penn to fight cancer, in order to improve the balance between scar formation and regeneration after a heart attack,” said co-senior author Jonathan A. Epstein, MD, executive vice dean and chief science officer at Penn Medicine. “The more we look, the more we discover that the immune system is regulating how we heal from injury in every way – acting like the conductor of a complex cellular orchestra.”

In a further experiment, the researchers applied a hydrogel laced with interferon gamma to the hearts of some of these mutant mice just after their heart attacks. As hoped, the artificial restoration of interferon gamma led to higher T-reg levels in the heart and much more moderate inflammation and fibrosis.

The findings show that epicardial YAP and TAZ are important not only for the normal development of young hearts but also for a healthier repair process in damaged adult hearts.

Jain, Epstein and their colleagues now plan further experiments to map out the fibrosis-causing immune response in more detail—a project that could reveal multiple targets for future drug interventions to prevent heart failure in heart attack patients. The team also plans to develop mice in which the YAP and TAZ genes are not deleted but are instead overexpressed. “The hope is that higher levels of these proteins will lead to a scar-free healing of the heart after a heart attack,” Jain said.

The research was supported by the American Heart Association, the Burroughs Wellcome Fund, the Singapore National Research Foundation, the Cotswold Foundation, the WW Smith Endowed Chair, and the National Institutes of Health (U01 HL100405).