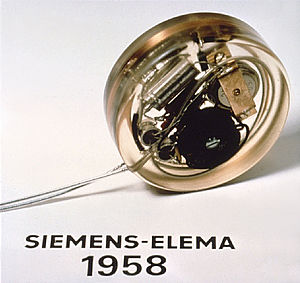 To the right you will see the worlds first pacemaker, now we are going wireless!

The world’s first wireless heart pacemaker was unveiled Monday. The device dramatically reduces surgical time so reducing cost and the chances of infection.

“Conventional pacemakers have to have a wire threaded through into the ventricle. That is very hard to place. And secondly we can place the electrode in a much better place and so get better results.” Pacemakers are in two parts, a pulse generator, with its associated power
supply, and an electrode that stimulates the cardiac muscle that is placed in  the heart. Such devices require three leads into the heart, one of which involves painstakingly threading a lead through a difficult and complex route running from the right atrium of the heart, out of the heart and into the coronary sinus, a vasculature structure on the outside surface of the heart to the left ventricle.

Chance of lead failure and infection

A pacemaker/defibrillator device is connected to the leads which are used to sense heart activity and to deliver electrical stimulation through electrodes at the end of the leads. The electrical stimulation applied to the right and to the left ventricles synchronizes the heart’s contraction in a way that improves overall cardiac function in heart failure patients. However, added to the difficulty of the procedure itself is the chance of
lead failure and infection. WiCS uses a lead-less electrode to convert mechanical energy, wirelessly transmitted from an ultrasonic pulse generator, into electrical energy which is used to pace the heart’s left ventricle.

“It is the same technology as was found in an old stylus. We beam the energy using ultrasound. That is picked up in the electrode and using piezo technology, the ultrasound is converted into an electrical signal,” said Mr. Diston.

“Provided you focus the energy onto the electrode it is very efficient.” “The device is currently in clinical trials in a number of places across
Europe,” said Mr. Diston. “They will carry on through 2012. We hope to get approval in 2012 for a European launch, and then will take the technology to America.” This, first generation device, is used to pace the heart as part of Cardiac Resynchronization Therapy. WiCS works in conjunction with a conventional pacemaker/defibrillator, sensing the electrical pacing pulse of the pacemaker from the right ventricle.

Mr. Diston said that future devices would be able to work without a conventional pacemaker being present.